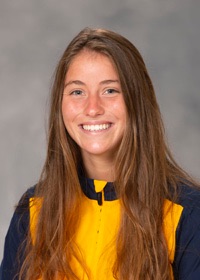 2019 Track & Field: Competed in a limited amount of events over the season…scored for the Bucs with an eighth place finish in the 5000m race at the VMI Team Challenge (Jan. 26)…competed in two outdoor meets as well as indoor meets, marking a season-best time in the 5000m with a time of 19:42.17…earned a spot on the SoCon Honor Roll.

Prior to ETSU: Ran track and cross country locally at Dobyns-Bennett High School in Kingsport for head coach Robert Bingham, lettering all four years of high school running the 5k in cross-country and the steeplechase in track...Named All-Conference and All-Region in cross country in her sophomore, junior and senior seasons...Broke the 2000m and 3000m steeplechase records at both DBHS and for the Slipstream Track and Field Club of Northeastern Tennessee and Southwestern Virginia...Personal records include a 19.11 5k time and a 7:30 2000m steeplechase time.

Personal: Born on November 3, 1998...From Kingsport, Tennessee…Daughter of Michael and Cheryl Sokol…Comes from an athletic pedigree, as her father, Michael, played one year of baseball at Iowa Western Community College before pursuing a boxing career that included training in Colorado Springs for the 1984 Olympics...Also, Hannah's sister, Kendra, was a cross country and track athlete at King College from 2008-2014, while her brother, Jeremiah, is a boxer at VMI...Hannah intends to major in biology while at ETSU.