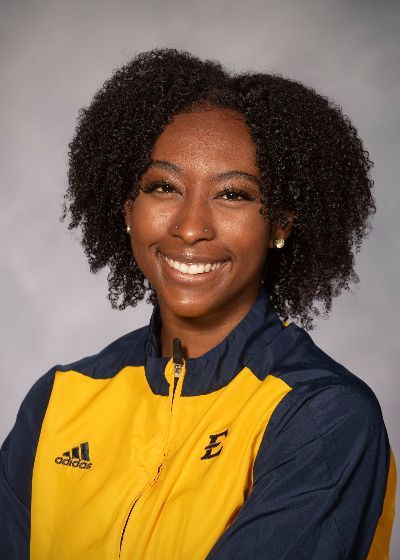 2019 Track & Field: Produced a sixth place mark of 11.04m in the triple jump to open her career at the ETSU Track and Field Invitational (Jan. 11-12)…bested her triple jump mark with a third place, 11.56m leap at the Buccaneer Track and Field Invitational (Feb. 1-2) while recording a PR of 8.55s in the 60m sprint…scored in the triple jump at the SoCon Indoor Championship (Feb. 23-24) with an indoor-best mark of 11.60m for Peterson…continued her form in the outdoor season, placing third in the Catamount Classic (April 12-13) with a PR of 11.70m while grabbing a second place finish in the 4x400…scored in the SoCon Outdoor Championship (April 27-28) with a sixth place triple jump finish…earned a spot on the SoCon Honor Roll…a SoCon Academic All-Conference selection.

Prior to ETSU: Spent the past two seasons as a multi-sport athlete on the NCAA Division II level at West Georgia, lettering in volleyball and track and field for the Wolves … Holds the UWG triple jump school record at 37’ 6.5” (11.44m) … Was a state runner up in 2015 at Cambridge High School, while also winning three region titles in the triple jump event … Transitioning her jumping abilities to the hardwood as a volleyball player, Peterson had 155 digs, seven kills and 14 assists in 2017 for West Georgia in a tough Gulf South Conference.

Personal: Born on May 22, 1999 ... from Alpharetta, Ga. … Daughter of George and Janet Peterson … Her brother, Devin, spent four seasons as a basketball player at Western Carolina … Her cousin is former 5x NBA all-star and 14-year veteran Chris Webber … Paige is majoring in mass communications with a focus in advertising and public relations … She is also ambidextrous.