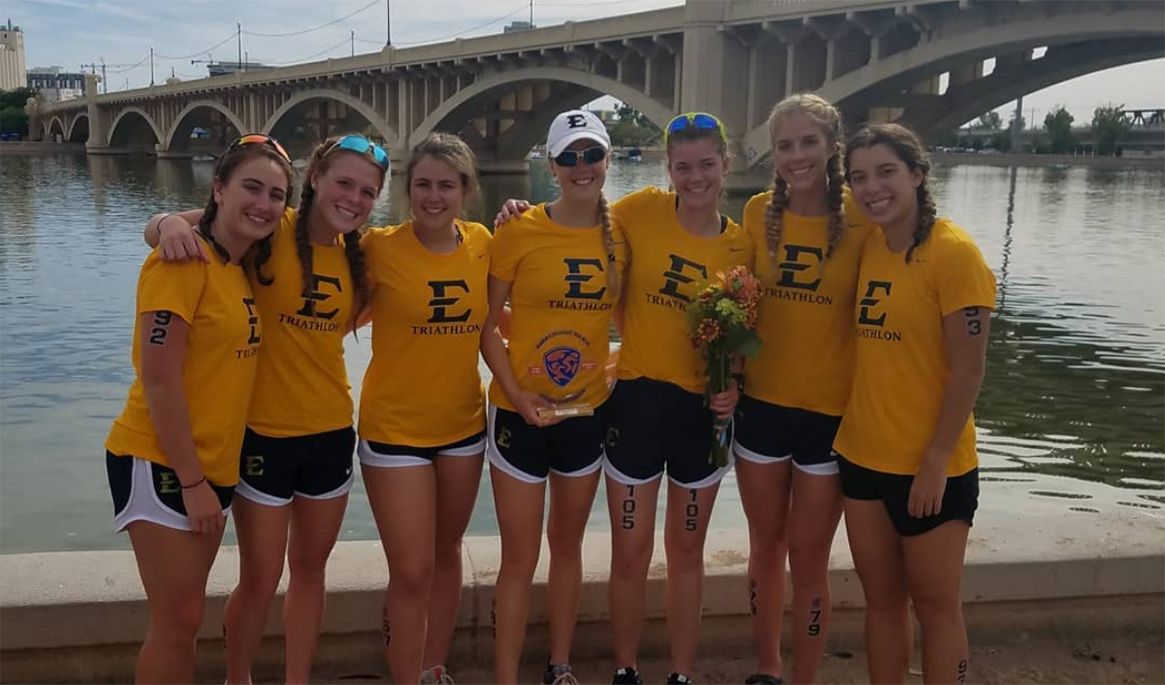 TEMPE, Ariz. (Nov. 4, 2018) – ETSU’s final race of the fall was their biggest thus far, and Lane McDonald (South Bend, Ind.) and company excelled, McDonald taking home national athlete of the year honors thanks to her cumulative performance throughout the 2018 season, while the Bucs finished third in Division I as a unit.

McDonald, who was the Bucs top finisher after passing teammate Cameron Seeley (Blacksburg, Va.) on the run portion of the three-pronged event, put up the best combined score at regionals to win USA Triathlon’s award given out to the top NCAA triathlete. McDonald finished in 12th-place at Sunday’s event with a time of 1:08:36, and the freshman was thrilled with the recognition for her strong 2018 campaign.

“I am very grateful to receive this award,“ McDonald said. “Thank you to USA Triathlon and the NCAA for everything they’ve done to support the development of the sport. Thanks to my family, coaches, teammates and friends for all the support they’ve given and especially to ETSU for the unlimited opportunities they supply.”

Finishing neck-in-neck in the top 15 for ETSU were Morgan James (Clovis, Calif.) and Seeley, James unofficially crossing only eight seconds ahead of her teammate after Seeley was the first Buc out of the water in the 750-meter swim, also putting forth an excellent day in the 20K bike. James exited the swim next to teammate Zoe Six (Charlotte, N.C.) before pulling ahead on the bike, Six fighting her way to her best finish of the season despite shin splints that limited her in the 5K run.

“The team raced hard, smart, and tough,” head coach Janine Pleasant said. “The last two weeks have been extremely high intensity and I am very pleased with how hard everyone worked.”

Taking home their third straight Division I title were the hosts Arizona State, the Sun Devils claiming seven of the first eight finishers, while South Dakota narrowly edged ETSU for second. The third-place finish for the Bucs is the third time in a row they’ve finished in the top three at nationals, while they also conclude fall of 2018 finishing in the top three in every one of the events they competed in.

ETSU’s calendar year is done, but they resume competition in the spring, a trip to Sarasota just over four months from now marking the front half of their spring season.

For more information on Buccaneer triathlon, visit ETSUBucs.com and click on the Women’s Triathlon page.