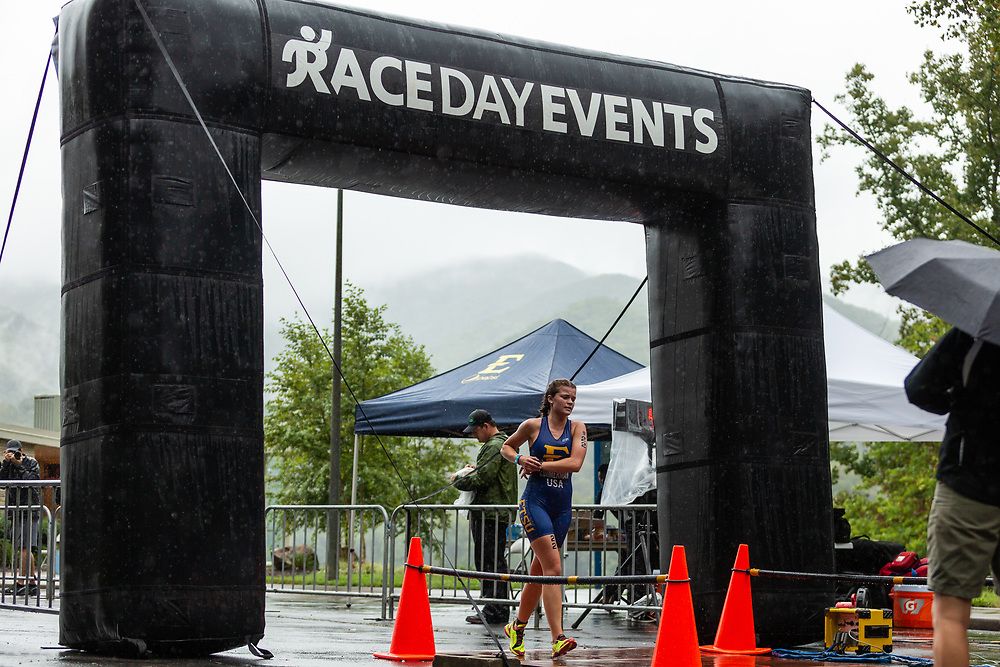 KNOXVILLE, Tenn. (April 14, 2019) – In a steady, driving rain on the campus of the University of Tennessee, sophomores Carly Brewington (Coral Springs, Fla.) and Hope Zimmerman (Crown Point, Ind.) put up a pair of top-five finishes at Sunday’s TriDeltathon to round out ETSU’s 2018-19 triathlon season.

“Hope had a strong overall performance,” head coach Janine Pleasant said. “Weather was an issue but neither Hope nor Carly let that affect them and they both raced hard.”

With predicted storms in the area, the outlook was grim for the running of the 35th-annual Knoxville race that starts in the University of Tennessee’s Aquatic Center, but with only rain covering the area and severe storms staying away, the competition went on as scheduled. The oldest running pool triathlon in the country, athletes swam 400 meters indoors, transitioned to an outdoor six-mile bike of the Volunteers’ campus, capped by a three-mile run passing Neyland Stadium and Thompson Boling Arena.

Zimmerman, who has been competing in triathlons all over the region for over a decade and has long been known as a top swimmer, proved that fact again Sunday, finishing second overall amongst female participants. The best part of her race, without much surprise, was in the water, putting together a quality swim and intermingling solid transitions to finish in 49:45.

With the conclusion of her second season with ETSU, Zimmerman continues to improve her craft doing what she loves.

“It’s been my dream,” Zimmerman said. “I always wanted to try triathlon, and once I figured out how much I love it, I wanted to compete at a Division I school.”

Zimmerman did more than compete Sunday, thriving in the indoor waters of the aquatic center, then the outdoor waters that pounded the latter two stages of the course throughout the event.

Brewington, who has followed in her father’s footsteps in adopting triathlon as her own, did the same, finishing the day fourth amongst females age 20-24, performing well in the pool and on the bike. Fighting through the less-than-ideal conditions to put up a quality result, Brewington feels a sense of pride knowing she’s finished her second season in Blue and Gold.

“The opportunity ETSU has presented has been great,” Brewington said. “It felt like home as soon as I came on my recruiting trip, and being here is an opportunity I couldn’t pass up.”

The only two Bucs competing Sunday, Brewington and Zimmerman had the honor of officially concluding ETSU’s 2018-19 season, its third as a program. On the heels of finishing third at the USA Triathlon National Championships behind national athlete of the year Lane McDonald (South Bend, Ind.), ETSU’s roster will grow bigger than its ever been next year, with six newcomers to add to a strong group led by McDonald and Morgan James (Clovis, Calif.).

For more information on Buccaneer triathlon, visit ETSUBucs.com and click on the Women’s Triathlon page.