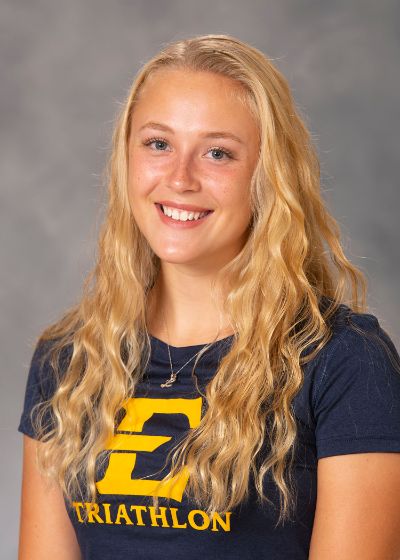 2019-20 (Sophomore): Competed in four races in her sophomore year for the Blue and Gold and placed in the top-5 in every race with two second-place finishes…Her season-best time was 1:02:16 at the East Regional Qualifier placing her on the CTCA Division 1 All-Region Team… In her first two seasons at ETSU, McDonald registered seven top-10 finishes… A member of the 3rd place National Championship team.

2018-19 (Freshman): Participated in five races during her freshman campaign and logged two top-5 finishes and placed in the top-10 in four races… Kicked off her collegiate campaign with a 6th-place finish overall and the top female at the Pre-“Bear” Tuneup on Sept. 8…She placed 2nd overall at the “Beware the Bear” qualifier and was eighth overall at the East Regional Qualifier which qualified her for the CTCA Division 1 All-Region Team and also picking up All-Region Freshman honors… McDonald’s success was shown as the was named the College Triathlon Coaches Association Athlete of the Year in her freshman season... With her top finish in the spring event at Clermont, she qualified for her USAT Elite License…A member of the 3rd place National Championship team. Recorded 3 top-20 Junior Elite Finishes and was chosen for the U23 Development Program at the US Olympic Training Center over the summer going into her sophomore campaign…She also was named a CTCA Scholar All-American and named to the SoCon honor roll.

Personal: Born on Jan. 7, 2000…Daughter of Mark & Lori McDonald…Majoring in communications with a minor in exercise science at ETSU.